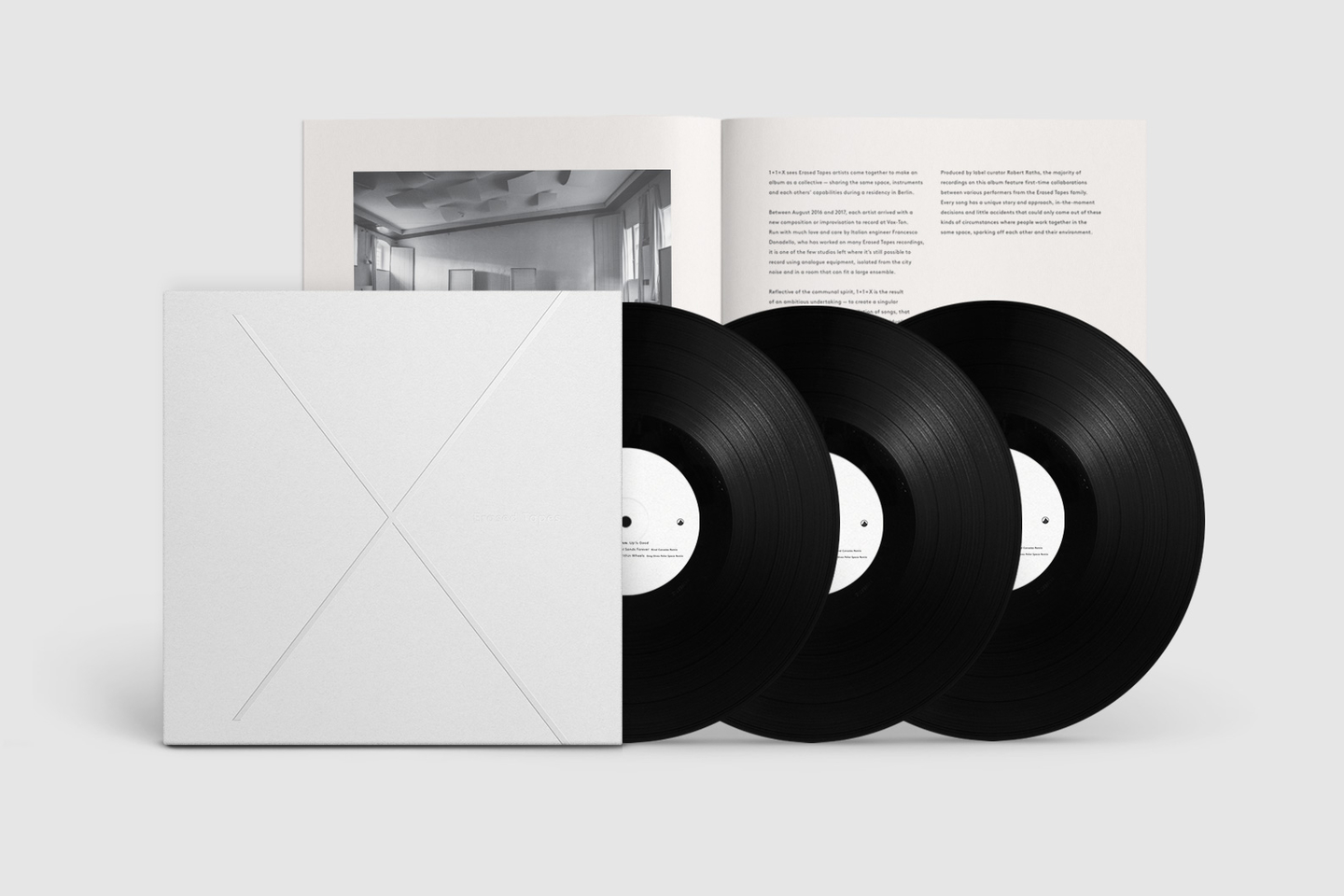 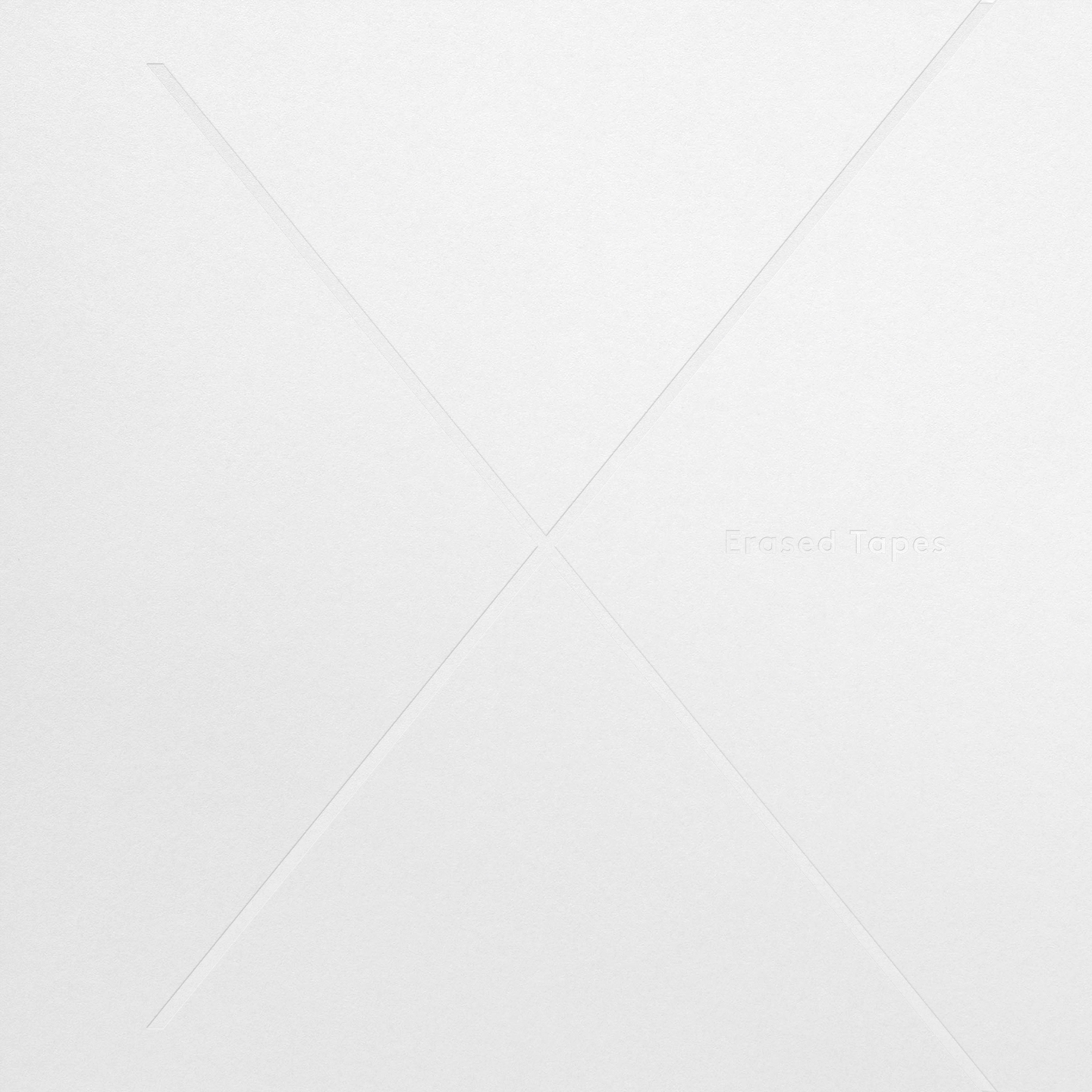 Erased Tapes rounds off a jubilant year of tenth anniversary celebrations with a very special release, 1+1=X, a set of exclusive music from every artist on the label. Featuring never before heard tracks from Nils Frahm, Kiasmos and A Winged Victory For The Sullen, 1+1=X sees Erased Tapes artists come together to make an album as a collective. Sharing the same space, instruments and each others’ capabilities during a residency at Vox-Ton studio in Berlin, they recorded 20 songs to mark the label's 10-year history. The 3-LP box set, produced by label curator Robert Raths, is released on Record Store Day, April 21st 2018.

“It was important to create something communal and reflective of our time, to capture something of value using traditional recording techniques, experimenting and reacting to each other in real time, sharing the same space,” says Raths.

“I suppose finding words and meaning to describe this release would be next to impossible. This recording was a real joy, to go back to our humble beginnings. To have the freedom to create art only for ourselves was truly sublime”
— Adam Bryanbaum Wiltzie of A Winged Victory For The Sullen

Between August 2016 and 2017, each artist arrived with a new composition or an improvisation to record at Vox-Ton. Run with much love and care by Italian engineer Francesco Donadello – who has worked on many Erased Tapes recordings before including A Winged Victory For The Sullen, Michael Price and Lubomyr Melnyk – it is one of the few studios left where it’s still possible to record fully analogue, isolated from the city noise and in a room that can fit a large ensemble. Reflective of the communal spirit, 1+1=X is the result of an ambitious undertaking; to create a singular record as a collective, not just a compilation of songs, that celebrates the benefits of community over individuality and improvisation over rigorous planning.

“As much as Erased Tapes probably wouldn’t exist if it wasn’t for the digital age, we should also remind ourselves of what we are capable of without it,” adds Raths. “1+1=X is a testament of what can be achieved when we work together as a collective, which is more than the sum of what we can achieve as individuals.” 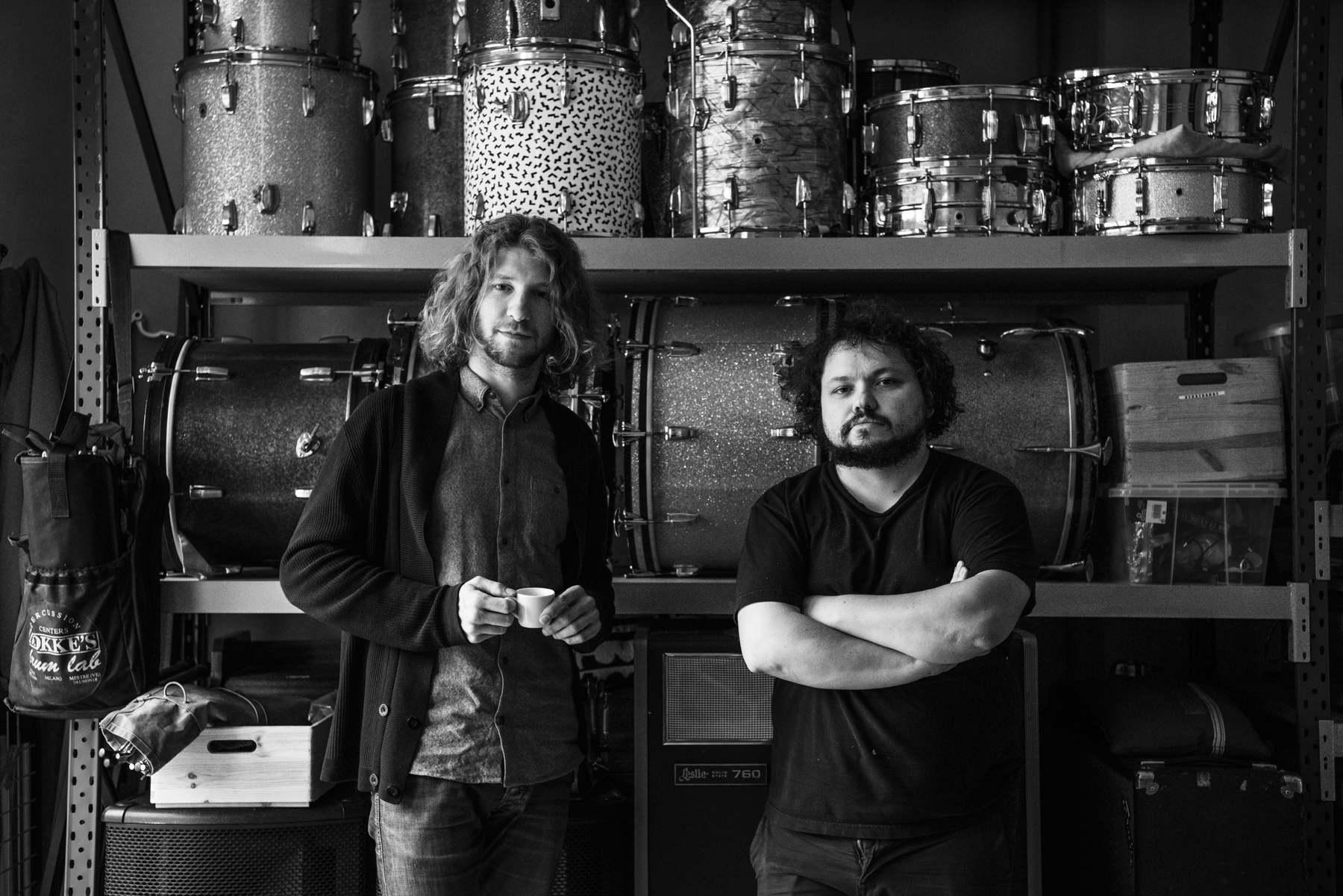 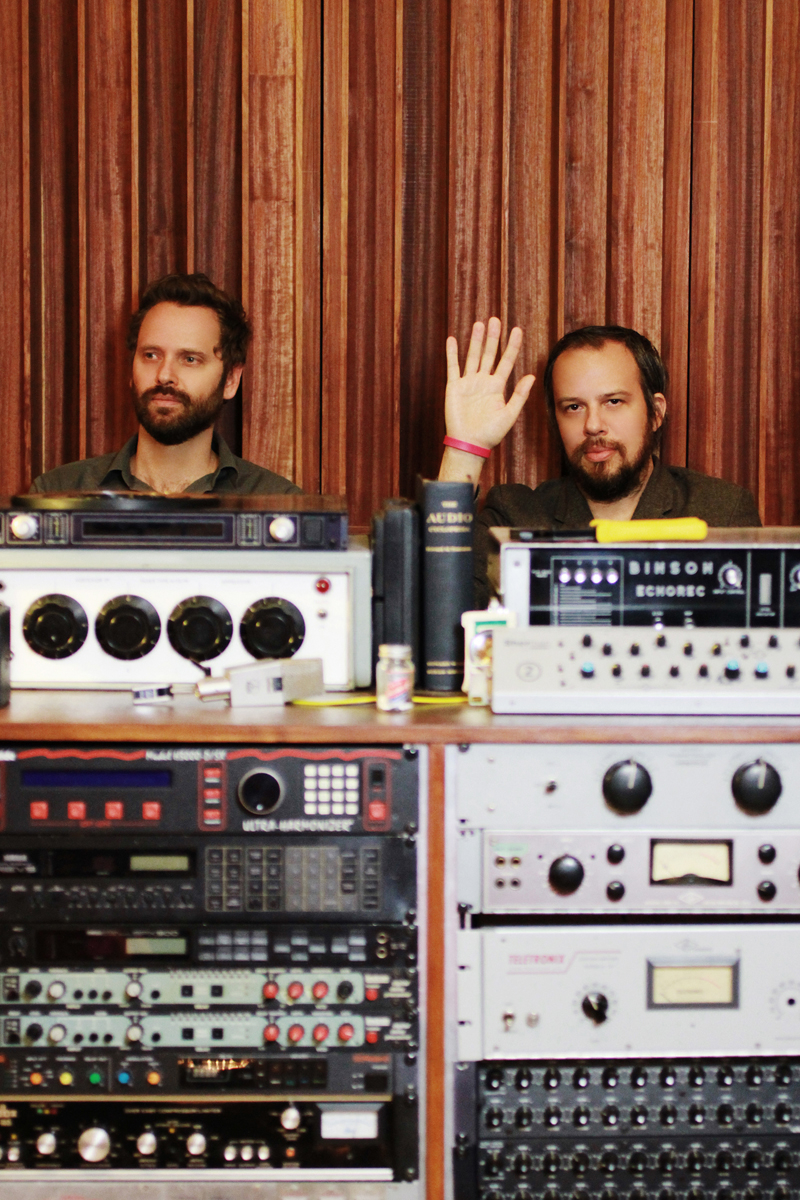 The majority of songs on this album feature contributions from multiple performers, whether it’s Nils Frahm duetting on the keys with Arthur Jeffes of Penguin Cafe, Kiasmos being joined by Högni and a string ensemble, Douglas Dare’s one-take Darling featuring Rival Consoles on synths, Masayoshi Fujita on vibes and Raths himself controlling the tremolo on his voice. Peter Broderick’s Perpetual Glow meanwhile, brings in a full big band and choir where everyone present, including the studio staff, was invited to grab any instrument and join in. Every song has a unique story and approach – in-the-moment decisions and little accidents that could only come out of these kinds of circumstances where people work together in the same space, sparking off each other and their environment. Even Rival Consoles’ remix of Daniel Brandt’s Blackpool Sands Forever was conceived of in the studio kitchen during recording breaks.

Japanese vocal performer Hatis Noit decided to bring a field recording of the ocean with her, which she had taken near the Fukushima power plant after participating in a memorial ceremony for the opening of the evacuation area. It is also no coincidence that the album opens with Brutal Moderna by Qasim Naqvi of Dawn of Midi and A Winged Victory For The Sullen’s Long May It Sustain, which were both recorded on the day the U.S. election results came in.

“Qasim asked me to read the news headlines with a stutter over the top of his piece. It was an oddly beautiful experience which brought all of us together on a day when spirits were otherwise a bit low,” says Peter Broderick. “I thought this residency was a wonderful idea. In fact I would have loved to be there for more of it. I made some amazing new friends, some stronger bonds with old friends and some wonderful pieces of music that I’m honoured to be a part of. Robert has often described Erased Tapes as a family, and perhaps above all else this was just his earnest effort to bring the family together. I hope we’ll have some reunions in years to come!”

Designed in collaboration with Torsten Posselt at FELD, the 3-LP set is accompanied by a book of photographs documenting the recording process. It is housed in a bespoke, hand-assembled white box — with a recessed X — that slides open to one side, and is limited to 1000 copies worldwide. 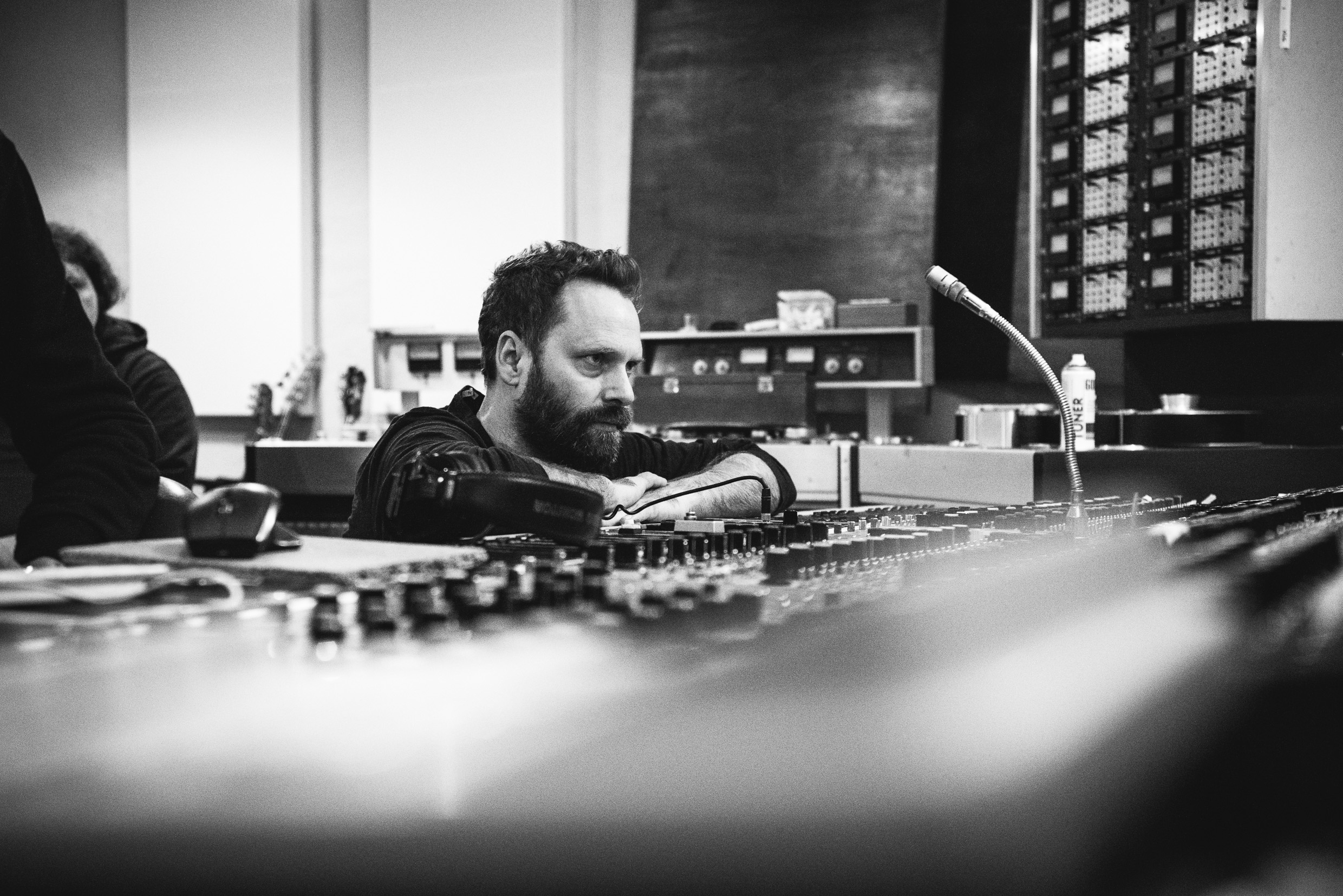