Some groups form in school or college, some grow out of teenage friendships and others from ‘musicians wanted’ ads; nearly all of them are formed with the initial idea of sounding like somebody else. None of the above applies to the Penguin Cafe Orchestra. Nor, for that matter, do most other generalisations about how modern music is and should be made, or why.

The PCO was the brainchild of the English composer and multi-instrumentalist Simon Jeffes (1949-1997). Because his father’s work entailed many foreign postings, his early life was spent on the move around Canada and Europe, an experience which left him, he said, with “this culture of slightly dispossessed people who live in the modern West but haven’t got one rooted home.” While at English boarding school, aged 12, Jeffes heard a guitar being played by a new boy. “It was like meeting your destiny” he reported later, “This guitar was actually glowing... there were sort of angels coming out of it. It was absolutely riveting.”

He played in an R’n’B band at school and when he left, he studied classical guitar and music theory at music college. Swiftly disillusioned with the factory-like conditions in which he was being taught, Jeffes dropped out and joined a 10 piece avant garde guitar ensemble, Gilberto Biberian’s Omega Players, only to find that also rather stifling - “it was a bit too cerebral for me.” So he turned to rock, working with the producer Rupert Hine on music for films, as well as Hine’s first two solo albums, 1970’s Pick Up A Bone and Unfinished Picture (1971). There are some demo tapes extant from this period which indicate that Jeffes was also then exploring the possibility of becoming a pop reggae vocalist.

In 1972 he got on the Trans Siberian Railway and spent four months at the other end in Japan. This was where he first became interested in ethnic music, particularly African, which he discovered on a cassette tape made up by a friend. “This tape just blew my mind, man!” he later told the journalist Andy Gill. “I didn’t want to go to Africa, or learn African instruments or sound African. What I heard was straight from the source, why it is we play music, that gut level sound of humans being human. There was a joy to it, an ease and integrity straight from the stomach and the heart. It wasn’t mediated by the mind at all.” And so began his plan to emulate the deep humanity of exotic folk music and merge it with his other more westernised enthusiasms within a previously unenvisaged ensemble. It was a mistake, he believed, simply to be a consumer of ethnic music, a goggle-eyed tourist at the world’s great musical bazaar. “It’s good to hear these things, but it shouldn’t be the end. The end should be us making our own ethnic music.”

A decade passed before this aspiration became a practical, economic reality. For the rest of the 1970’s, alongside his Penguin activities, Jeffes carried on working as a freelance producer and arranger, working with a rich mix of artists from Caravan and Rod Argent to Yvonne Elliman and the 101-ers. His best-remembered work from this period is probably the string arrangement he contributed to Sid Vicious’s version of My Way. “Through Malcolm McLaren I became a sort of musical consultant to the New Wave. He later asked me to explain the principles of Burundi drumming to Adam Ant.” Simon Jeffes’ musical taste was omnivorous but his special favourites were, in no particular order: Beethoven, Bach, Erik Satie, John Cage, Abba, Wilson Pickett, Zimbabwean mbira, Cajun fiddle, Irish bagpipe, Venezuelan cuatro, West African choral, the Rolling Stones, Stravinsky. The PCO formed in the mind of Simon Jeffes as a result of a dream-like vision he experienced during a severe bout of food poisoning in the South of France during the Summer of 1972. Simon retold the story often. This was how he remembered it in 1988, just before the orchestra played their first gig in LA.

“I was laying in bed delirious, sort of hallucinating for about 24 hours. I had this one vision in my mind of a place that was like the ark of buildings, like a modern hotel, with all these rooms made of concrete. There was an electronic eye which scanned everything. In one room you had a couple that were making love, but lovelessly. It was cold sex with books and gadgets and what have you. In another room there was somebody just looking at himself in the mirror, just obsessed with himself. In another room there was a musician with a bank of synthesisers, wearing headphones, and there was no sound. This was a very terrible, bleak place. Everybody was taken up with self-interested activity which kept them looped in on themselves. It wasn’t like they were prisoners, they were all active, but only within themselves. And that kept them from being a problem or a threat to the cold order represented by the eye. A couple of days later I was on the beach sunbathing and suddenly a poem popped into my head. It started out ‘I am the proprietor of the Penguin Cafe, I will tell you things at random’ and it went on about how the quality of randomness, spontaneity, surprise, unexpectedness and irrationality in our lives is a very precious thing. And if you suppress that to have a nice orderly life, you kill off what’s most important. Whereas in the Penguin Cafe your unconscious can just be. It’s acceptable there, and that’s how everybody is. There is an acceptance there that has to do with living the present with no fear in ourselves.”

The music of the Penguin Cafe, Simon broadly regarded as “a very big yes to the survival of the heart in a time when the heart is under attack from the forces of coldness, darkness and repression.” When forced to describe it more precisely, he called his music “imaginary folklore” and “modern semi-acoustic chamber music.” He very much liked the comment of a Japanese girl who attended a Penguin concert in Japan and who said afterwards that the music sounded strange because it was as if she’d heard it a long time ago. Dissolving the otherwise insuperable barriers of time and space was, and still is, an important function of the magic contained in his music. Simon Jeffes always conceived his Orchestra to be a fluctuating unit rather than a tightly cast group: aside from one other founder member, the cellist Helen Liebmann, there were no regular performers. Dozens of players passed through the Orchestra’s ranks in the 24 years of its young life. “It is my context as a composer,” he said. “I write for people rather than instruments.” 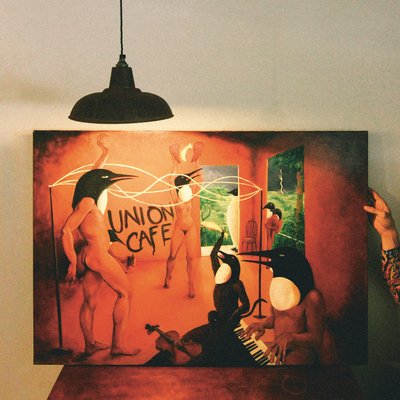