Yoann Lemoine aka Woodkid is a French songwriter and composer, director and graphic designer who has carved out a varied and highly successful career across many mediums. In 2013 he released his debut album The Golden Age that is built on percussion, strings, brass, piano, programming and a strong but sensitive voice. As an altruistic visionary with a modern and powerful solo project, he has also collaborated with great artists such as Lana Del Rey, Pharrell Williams, Hans Zimmer, Jonás Cuarón and most recently with JR and Nils Frahm.

Frahm is an accomplished composer and producer, working from his Berlin-based Durton Studio. His unconventional approach to an age-old instrument, played contemplatively and intimately, has won him many fans around the world. For a musician this early in his career, Frahm displays an incredibly developed sense of control and restraint in his work, catching the ear of many fans.

JR is the pseudonym of a French artist, director and photographer whose identity is still unknown, and who has been described as the French Banksy. His large scale black-and-white portraits are among the most iconic in contemporary street art, drawing our attention to stories that might otherwise be forgotten.

Unframed, which features prominently in the short film Ellis, does just this, memorialising through photographic prints those who came through Ellis Island. Directed by JR it tells the story of one such migrant. Starring Robert De Niro, the film winds its way through the crumbling hallways of the abandoned Ellis Island hospital complex, now home to JR’s Unframed art installation.

Entwined with the narrative of Ellis is a score composed by Woodkid, performed and co-written by Nils. Following a screening of the short as part of the Frahm-curated Barbican Weekender in London, the score was released on Erased Tapes in July 2016, the same week as America’s great federal holiday. JR and Nils Frahm collaborated again when Nils and label peer Ólafur Arnalds took part in his takeover of the world famous Louvre museum in Paris. 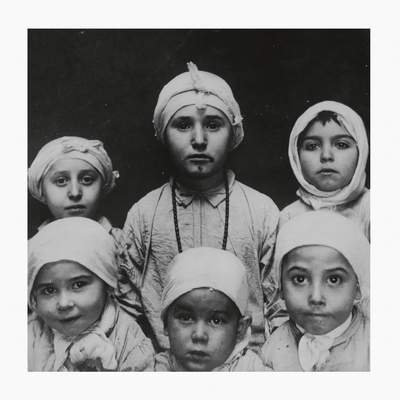